Koi with a Red Head Patch

Tancho are koi that have a single hi marking isolated on the head, and bodies de-void of hi markings completely. Tancho most generally refers to the Kohaku that sports a lone circular pattern of hi on the head and a solid white body. Although, Tancho koi are produced in other Go Sanke varieties, exceptionally good ones are very rare.  Tancho do not form a single, independent kind of Nishikigoi; they can be bred from Kohaku, Sanke or Showa. All are three-colored fish, but their red pigment happens to show up only in the head region. Tancho, therefore, cannot be produced in bulk, much to the disappointment of most koi collectors.

The essential point for appreciation is the red patch, of course. A circular red head patch sitting on the center of the head is ideal. It should be deep, even crimson red and placed centrally between the eyes. Its size should be large enough to cover the region between the koi’s eyes, forward toward the nostrils, and back toward the shoulder. Preferably, it should not extend onto the scales or eyes, nor beyond the nostrils toward the mouth of the koi. Hi patches of non-traditional shapes are gaining popularity. Tancho markings that are oval or heart-shaped are acceptable, although, symmetry is of utmost importance. The white skin is also important; it is the snowy white base color that sets the red head patch off to its best advantage.

Goshiki, Hariwake and other patterned koi sporting a symmetrically round head pattern are rarely seen and usually mis-identified as a Tancho variety. When a koi other than Go Sanke are found with a circular patch on the head they are not considered as Tancho variety; they will compete in their respective classes. However, they may gain an advantage with the judges for their spectacular pattern reminiscent of the Tancho. 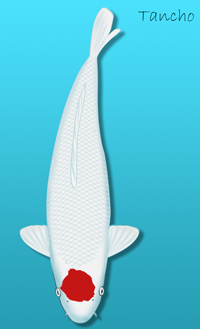 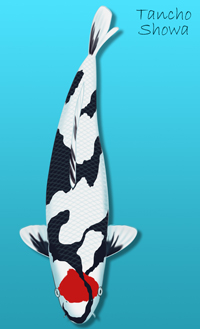 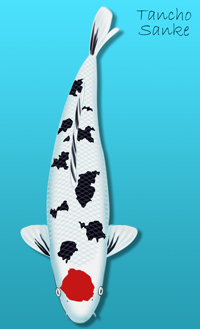