Goshiki koi have been called peacock koi. The term peacock koi refers to the five colors on the body of the koi. The base color of this variety is white and the fins are generally white and free of any pigment. The pattern markings on Goshiki are red, or Hi. The scales develop blue colors and a black outlining, or reticulation (net pattern).

A high quality Goshiki koi should have a well-balanced Kohaku pattern of Hi, as well as gray or blue scales with consistent reticulation on all of its scales.

Goshiki may be found in butterfly koi as well as standard fin type. Kloubec Koi Farm is a breeder of Japanese Goshiki variety koi. Search for Goshiki with light blue color at an early age.

Goshiki used to be included in the Kawarimono group. However, with recent production of fairly excellent Goshiki, they are now being treated as an independent variety at Nishikigoi shows, and sometimes compete along with the Koromo group. Some scales of Asagi may also appear in the red markings. The meshes appearing only on the white ground will, on the other hand, contrast strikingly with mesh-less red patches. 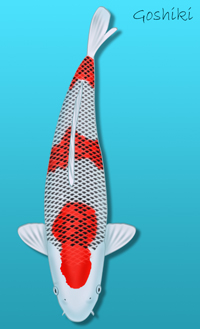