Showa is another very popular koi variety for Japanese koi ponds and water gardens. When you search for quality koi for sale, look for a Showa that has a pleasing Kohaku pattern of Hi. Next, review the white or Shiroji. It should be clean and clear, actually appearing bright in contrast to the other pigments. Finally, look at the additional bands of black, or sumi pattern. The sumi should form black bands which wrap around the body and face as seen on the Shiro Utsuri variety. Additionally, many Showa koi may have sumi appearing at the joint of the pectoral fins, called motogoro. The sumi of Showa seems to be all connected below the surface and encompassing the body. Consequently, Showa appear quite magnificent.

Showa koi have red markings and white patterns formed on the black background, whereas Sanke koi fish have red markings and black patches on a white background.  Showa have much more sumi than the Sanke, and it is very different from the sumi on a Sanke. While the Sanke sumi looks like western oil paintings, the Showa sumi carries the tone of oriental black-and-white paintings made with ink.

We have discerned such different arrangement by observing the processes of fry development. Kohaku and Taisho Sanshoku are almost completely white when freshly hatched. Young fry of Showa varieties (including Showa Sanshoku, Shiro Utsuri and Hi Utsuri, etc.) on the other hand, are almost completely black when just emerged from eggs. As days go by, white patterns become visible against the black background, and red markings will soon appear on the white patterns. As a breeder of Japanese koi fish, Kloubec Koi Farm produces Showa and Showa Longfin, butterfly koi. 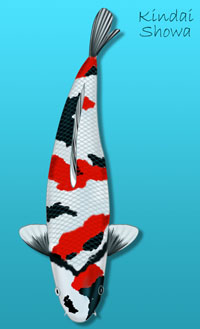