Koi in the Hikari Utsuri class are basically metallic versions of Showa and Utsuri. They have a metallic Platinum base color. The point of appreciating this group is of course the intensity of the Hikari, or luster of the skin.  Hikari literally means metallic luster. Their markings are similar to those of Showa and Utsurimono group; sumi bands of pigment and pattern of one other color, but appearing on a Platinum metallic ground rather than on a Shiroji base. The ideal pectoral fins will have sumi at the base, called motogoro. Although, the yellow and red versions have stripes on the pectoral fins rather than displaying motogoro. The varieties in Hikari Utsuri class are: Kin Showa, Gin Shiro Utsuri, Kin Ki Utsuri and Kin Hi Utsuri.  In addition, Kage types (with shadow sumi) fall into this classification also.

Generally a strong metallic luster has the tendency to make the pigment fade, so as, Hi can have a brownish tint and sumi may appear as gray. There is an intricate aspect which we must pay close attention; both Hikari and sumi pigment have a tendency to cancel each other -- most koi with strong Hikari have light sumi. Consequently, koi having brilliant Hikari and strong sumi simultaneously are very rare indeed. 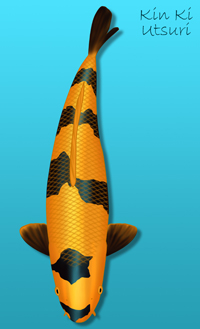 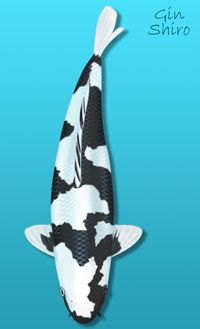 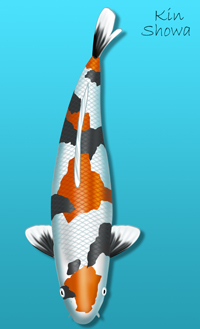